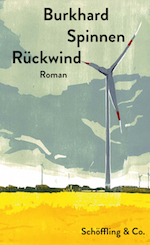 Hartmut Trössner is a lucky man, a green-energy mogul who has captured the spirit of the age. The head of a successful wind-energy company, Hartmut is also married to a popular actress, the father of a young son and, most recently, the producer of a ground-breaking TV series. Then 9 April 2018 happens. In a single day, Hartmut loses literally everything: company, wife, child and house. He spends that hot summer in a clinic.

Five months later, Trössner boards a train to Berlin. And he’s not alone. There’s someone with him, an invisible figure audible only to Hartmut: an alter-ego determined to train him for survival and enable him to move forward with his life. On the train, Hartmut is approached by a young woman. Piece by piece, he shares the story of his life, and together they plan to make a fierce, rousing entrance to the German capital.

TAILWIND is a novel about a terrible loss, one which might seem to many people like a test or a divine punishment, like a modern retelling of the story of Job. Hartmut Trössner, however, is a firm believer in the motto Above us only sky. There’s no one up there! And yet – he still longs with every fibre of his being for an answer to the eternal question: Why is it that things have to happen the way they do?

»A new tale of Hiob with a proper surprise effect, about the rise and fall of a wind power entrepreneur.«
Julia Schröder, Stuttgarter Zeitung

»A political novel on economics, ecology, and the morals of media.«
Karin Grossmann, Sächsische Zeitung

»A brilliant novel, frighteningly realistic, narrated with subtle irony and asute awareness. Just the right book for and about our time.«
Michael Braun, Kölner Stadt-Anzeiger

»A great novel full of twists and turns, a gripping thriller, and a portrait of the Germany of the past 30 years.«
Matthias Schümann, NDR Kultur