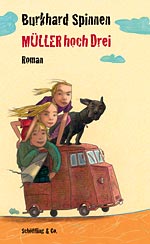 
Seven days before his 14th birthday, Paul Müller’s parents abandon him. They are going on a tour around the world. Paul, a hesitant and overcautious only child, is now supposed to grow up fast and get along on his own. He’s not thrilled about this. On the contrary, it throws him for a loop.

But this is only the beginning. Suddenly Paul’s sheltered life in sleepy Neustadt seems to have gone topsy-turvy. An untrained dog with a dangerous appetite and his twin sister, Paula, on the run from her Indian adoptive stepfather, burst into his confusion in rapid succession. And then his multiply allergic Aunt Elke tells him his complicated family history. Paul would now like to pull his beloved patchwork blanket over his ears, but it’s definitely too late for that. Instead, Paul and Paula, together with the dog Piet, begin an adventure-filled journey.

Following the great success of BELGISCHE RIESEN, Burkhard Spinnen presents his second children’s and young adult book. MÜLLER HOCH DREI is a fast-paced, inventive and rather strange family story for readers ten years and up.

»A roadmovie across the republic (...). Like so many TV series, the story is deliberately haywire. There’s a very clever magical dog and an animal trainer who can find out anything about anyone using his computer. The facade of everyday realism is riddled with cheerful cynicism. (...) MÜLLER HOCH DREI provides a sophisticated book for your reading pleasure.«
Süddeutsche Zeitung / Critics’ Choice (Books for Young Readers)

»The entire constellation reminds of Erich Kästner’s Emil and the Detectives. (...) Spinnen’s fantasy is sparkling, he comes up with hair-raising episodes and technological marvels, phantasmagoric slapstick elements, and formidable wordplays. Playing out the full range of comedy from pure silliness to black humour, he unleashes a firework of puns. (...) Just as good as Kästner!«
DeutschlandRadio

»Spinnen subtly peeks into the mindset of a 14-year-old. Accomplished, fast-paced writing.«
Kreuzer

»Right on the opening pages there’s a firework of screwball ideas, fun dialogue and absurd family constellations. (...) Most imaginative and linguistically brilliant. (...) An exquisite, unconventional reading pleasure for many ages.«
Stuttgarter Zeitung

»The story prances forward in best road movie style, as allergic aunts, digitally adept animal trainers and indian grammar artists flash by. (...) Unlike your average road movie hero, Paul Müller has found his wilderness, and a good part of it lies in the discussions with the strongheaded Paula and the quarrelsome Pauline.«
DIE WELT

»MÜLLER HOCH DREI could be a very heavy problem novel. But it is strange, fast and funny.«
Tagblatt

»(...) a wild mixture and an odyssey that leads from the Baltic Sea to the Alps, that does not leave out the ›Adlon‹ in Berlin, and that plays with lots of humour in a sleepy café before and afterwards. (…) Above all, Spinnen proves again what we know since Tom Sawyer, Heidi and Pippi: a child’s life will become exciting only if the parents leave town.«
Neue Zürcher Zeitung am Sonntag

»The novel convinces with rapid speed, humour and puns. Burkhard Spinnen knows how to connect everyday’s reality with bizarre incidents and how to depict them with a good portion of irony and cynicism. (...) Eight years after the success of BELGISCHE RIESEN, he now succeeds in presenting an inventive, funny and very bizarre story of development, in which he does not only turn the world of his protagonist upside down, but also that of his readers. (...) A wonderfully crazy and unique book with a lot of irony and wit, inviting readers to a good laugh.«
Lesebar / Society for research in reading and young adult media

»By interweaving realistic and fairytale-like elements with slapstick components, Burkhard Spinnen successfully creates an ironical-satirical coming-of-age novel with a difference (...) Pleanty of weird adventures. What fun!«
The White Ravens