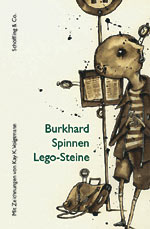 What was it like: to have just turned 12 in 1968? That is to say: newly twelve in a rural suburb, what’s more, with a rather in-the-middle-of-nowhere feel about it and just that little bit too young for anything of real interest. Was it formative? Or typical? The fundamental years of a »78er«? Or are these questions one shouldn’t ask? Perhaps it’s simply become established practice – through regular use – to imbue one’s childhood with such significance. A quirk, a literary spleen. Or not?
Burkhard Spinnen at any rate would have kept pushing his doubts to one side about what to do with the miniatures of his own childhood that emerged in the course of the years, had he not met the artist Kay Voigtmann.
For the result is an illustrated book in the true meaning of the word. Kay Voigtmann has taken the »I« of Spinnen’s thumb-nail sketches and made it shine. His drawings closely adhere to the motives and incidents of the short texts – at the same time they reveal a world unto itself, intricate and drolly comical.

LEGO-STEINE are by far the smallest, and simultaneously most personal, building blocks of the Spinnen-esque world of language and character. His detailed descriptions provide a forum for his ability to pinpoint, on the tiniest of canvases, how catastrophe and the everyday differ. And Voigtmann’s drawings do the same, being satire and idyll rolled into one.

»Dreamlike yet realistic quality, wisdom and sensuality... the deep respect for the strangeness of childhood expressed in the text and illustrations makes a beautiful illustrated book that gives you plenty to see and think. Disquieting, touching, and exemplary.«
Badische Zeitung

»Do we really need another book of childhood memories? The answer is: yes! – provided that it comes from Burkhard Spinnen.«
Frankfurter Rundschau Magazin