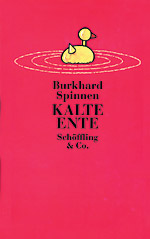 Fourteen protagonists find themselves embroiled, some more others less intentionally, in fears, illusions and desires regarding family matters. The family inevitably proves itself to be a simulation, an unsuccessful imitation of something that used to be safe.

»With these ironic tales of woe about middle-class people the German short-story has been shaken out of its torpid sleep.«
BRIGITTE

»Spinnen's language is slender and clear, his tone unmistakeable. At the moment in German literature it is very rare to read such simple but rhythmical and conversely con-structed sentences, to hear such concise and contemporary dialogue in its natural form. Whoever doubted that new reading material, both entertaining and unobtrusively capti-vating, existed outside English literature, should read Burkhard Spinnen's KALTE ENTE.«
Neue Zürcher Zeitung

»What is so highly regarded in English literature by German readers can now be found in Spinnen's short stories: wit and intelligent entertainment.«
Süddeutsche Zeitung