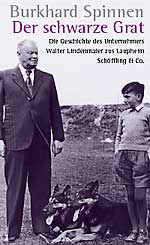 Burkhard Spinnen
The Black Ridge. The Story of the Mid-Sized Entrepreneur Walter Lindenmaier from Laupheim

It really doesn’t happen every day. By chance an author to know a mid-sized entrepreneur. They get talking, and the entrepreneur offers to tell the author the story of his life and that of his firm. In detail and withholding nothing. And fear not! he says, as the author wants to quieten him, he won’t offer a success story dazzling and dull in equal measure. The author asks for a sample and then some time to think it over. Finally work begins. Six years later a book emerges, the like of which hasn’t existed before.

DER SCHWARZE GRAT is the portrait of a representative, as extraordinary as he is typical, of a virtually unknown species. The factory owner Walter Lindenmaier from Laupheim has hitherto been as little known to the public as literature is acquainted with the mid-sized entrepreneur, although apparently the weal and woe of the German economy depends again upon the latter nowadays. Instead the entrepreneur is disappearing in Germany beneath age-old prejudices, his image a jumble of simplistic clichés.

DER SCHWARZE GRAT, however, opens the door to an authentic life of an entrepreneur and to a real existing firm. It deals with the sometimes spectacular ups and downs, with the very individual and extremely exciting story of a family firm. Simultaneously, the economic history of the Federal Republic appears from its beginnings amongst the rubble of war up to the present day beneath the sword of Damocles provided by globalisation.

DER SCHWARZE GRAT told from a documentary angle, is a lesson about success and failure, about the power and weakness of the entrepreneur and in particular about the human factor of the economy. And it is also a lesson about the relation between narration and reality.

»A most remarkable book in many ways. A stroke of luck for the reader: Where else could one fine such details to entrepeneurship and the business of finance. Reading Burkhard Spinnen shows again how this essential part of our lives is usually covered by modest discretion.«
Welt am Sonntag

»A stroke of luck for contemporary literature.«
Frankfurter Rundschau

»A steady Up and Down, this mid-sized entrepreneur fighting for survival in times of globalisation. Like a thriller.«
Frankfurter Allgemeine Sonntagszeitung

»The turns this company takes in its history no serious author could have possibly imagined. (...) Captivating exotic of the obvious.«
Stuttgarter Zeitung

»An astonishing book that will leave you captivated.«
Rheinische Post

»This is a thrilling piece of the history of the economy of the Federal Republic of Germany.«
Journal Frankfurt

»A stroke of luck. An exceptional documentation. Starting from DER SCHWARZE GRAT German literature ought to descend into the valleys of economy.«
Die Literarische Welt