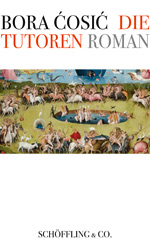 Winner of the Prize of the Leipzig Book Fair 2016, category translation

A European masterpiece appears in German for the first time, a pyrotechnic display of puns, stylistic diversity, linguistic invention and exuberant comedy.

What Joyce’s Ulysses is for Ireland, THE TUTORS is for Serbia: an avant-garde, almost untranslatable masterpiece full of wordplay and stylistic diversity, an experimental laboratory of language – and incredibly funny to boot!

At the centre of it all is a family saga set in Slavonia, which is told in a variety of different ways, whether through a pub brawl, a lexicon or a conversation in a bookshop. The narrator, a passionate collector of curious phenomena, has a particular fondness for everyday things. Bora Ćosić, who was banned from publishing his work during the writing of DIE TUTOREN, marshals all his powers, ridiculing nationalistic myths and ideologies of all stripes. From a rebellious orthodox priest in the nineteenth century to energetic, entrepreneurial women to a nameless author, he traces an arc spanning more than 150 years of European history.

»If ideologies crumble, language goes wild. With her exuberant wordplay Brigitte Döbert models a compendium of Balkan follies.«
Prize of the Leipzig Book Fair, The Jury

»Bora Ćosić's THE TUTORS is Balkan avant-garde and a novel about the essence of language in itself (...). In his ludicrous book the Serbian writer undermines the paternalism of language.«
Prize of the Leipzig Book Fair, Laudatory Speech

»What a book: Ingenious, sublime, unreadable. (...) A book like a frenzy, and an exercise in loneliness: Reckless and almost delirious. It comes from a long gone part of history, when the process of writing and continuing to write possessed an existential quality. (...) The diversity of voices, the coexistence of peoples and cultures (...) marks out THE TUTORS as a great European novel.«
Süddeutsche Zeitung

»A highlight of European linguistic artistry. (...) A fulminant text with cryptic humor that is not in the least outdated.«
Frankfurter Allgemeine Zeitung

»On either well structured or wildly mixed word fields lie - blazing, enchanting and upsetting - the polyphonous masses of words that speak of lost kingdoms and the Titoist federation that was still in existence when this great and completely outstanding novel was first published in 1978. (...) Bora Ćosić has added a smooth vivacity to the genres of the novel and the family chronicle, or rather the parody thereof, by using the means of experimental literature.«
Literarische Welt

»A masterwork, a stroke of genius, a piece of world literature (...) Bouvard et Pécuchet and JR belong to world literature - and also THE TUTORS play in this league. (...) the author and his translator have accomplished something enormous. (...) Even if it's impossible to read it, one feels richer knowing that THE TUTORS exist.«
NZZ am Sonntag

»THE TUTORS is a cornucopia revealing the emptiness of the world with abundance. (...) A vast historical collection of curiosities and a big monument to the literary modern age with all its finesses.«
Deutschlandradio Kultur

»A great work of European literature. (...) How THE TUTORS fell into the reputation of untranslatability quickly becomes clear in this immensely polyphonic text that incessantly changes perspectives as well as stylistic devices. Allusions, enumerations, phrases, slang, advertising and technical language are wildly mixed, always animated by subtle humor.«
Der Tagesspiegel

»No matter what form it takes, the language is overflowing. It is violent, it mows down everything, it annoys. The novel tells of how language is empty, and how funny and how sad that is - and how much damage language can do as an instrument of power or as a translator of emotions. (...) A social portrait of the century.«
tageszeitung

»When you open this book, don’t expect your usual pleasant diversion, significant insights, beautiful language and, even less, meaning. Bora Ćosić’s THE TUTORS is a wild jabber of cliché, gossip and nonsense of all sorts, it is, as the author puts it, a “chronicle of insignificant events”. This novel is no less than one of modernism’s last great attempts to radically expand the discursive horizon of art.«
Österreichischer Rundfunk

»This is a colossal book. (...) Ćosić has written a subversive novel against the respectable citizens’ quite normal obsession with tidyness. Those who understand the joke won’t stop shaking their head and laughing with recognition.«
Westdeutscher Rundfunk

»Bora Ćosić is an anarchist undermining the seriousness of literature.«
Bayerischer Rundfunk (Bayern 2)

»Bora Ćosić’s monumental Serbian novel poses a great challenge to the reader – which makes it no less wonderful. (...) With virtuosity and consistency, Bora Ćosić turns the worn out side of language to the surface, making huge parts of the novel a whirlwind ride for the reader.«
Cicero

»It was an extraordinary achievement to make this piece of world literature available.«
Burkhard Müller, Deutschlandradio Kultur

»Unmistakably avant-garde, but in no way impossible to read, instead highly amusing and even apparently conventional (…) The way Ćosić criticises the language of power is very entertaining.«
Stuttgarter Zeitung

»Bora Ćosić’s family saga THE TUTORS is an insane verbal excess, insanely humorous, insanely allusive, insanely extensive. A magnum opus in every sense. (...) For a long time, THE TUTORS has been praised and considered untranslatable due to its excessive use of references, parodies and malapropisms. Eventually, Brigitte Döbert has rendered this major novel in the course two years of work and is now finally presenting it. A modern classic is about to be discovered.«
Deutschlandradio Kultur

»Bora Ćosić is without a doubt one of the great East European authors. (…) A polyphonic opus with a powerful language that came to be a cult book in Jugoslavia because its author is celebrating a verbal festival on every page and doesn’t leave it at worshipping the past like Marcel Proust. (…) A festival of language with fireworks of styles.«
intellectures

»But: Fear not! The fruits of reading are so diverse, so remote, so refreshing for mind and heart, that the triviality-laden novel racks at airports and train stations will collapse in a heartbeat, as soon as they sense the energy of this book.«
Der Falter

»By means of a remarkable linguistic inventiveness, Ćosić achieves polyphony as well as ambiguity and complexity of travesty in his work. But eventually all this results in a family chronicle that makes visible the tragedy of banal everyday life and populist slogans.«
Politika, 1978

»The super-wordy novel is remarkable as a literary feat, the writing bubbling over in often delirious word-play and pastiche, all flow and flood; even in translation it impresses greatly simply from a technical point of view. But there's considerable substance to it too – at every level, from its individual pieces and approaches to the whole. Beyond that, the very genuine warmth of family-recollection reïnforce the personal to it: heartfelt, Tutori isn't simply a display of cerebral invention and writerly showmanship.
A rich, grand, epic (if not in the most traditional ways) novel, Tutori is certainly a masterpiece. It's a lot to chew, too, but certainly worthwhile. Tutori is commentary on writing, language, family, and the cultural and political experiences of the region across these times, with the frustrating Serbian-Croatian tensions among much that plays an over-large role for much of the time.«
M.A. Orthofer, The Complete Review