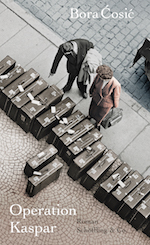 The peculiar path of a nameless, middle-aged couple leads from the “stable” across “the street” to the “garden.” The “stall” is a genteel but garbage-strewn apartment in some European city of the past century. Surrounded by newspapers and heavy furniture, the husband rides his bicycle around the hallway and ponders life; the wife cooks, sweeps, and sews on buttons in silence. One day, they break with their routine, flee abroad, and find themselves on the street with nothing but an over-sized empty cardboard suitcase. They are picked up by the police, who do not understand their language and who, overwhelmed, deport them. So they end up in the “garden”—whose owner, Professor Daumer, needs help harvesting asparagus. Like the teacher of the famous foundling Kaspar Hauser, Daumer teaches his charges a new language by way of botany. Yet the secret operation that is taking place in the background comes to an abrupt and disastrous end.
With Operation Kaspar, the “grand old jester of the Serbian avant garde,” as the Neue Zürcher Zeitung dubbed Bora Ćosić, has written a pointed, profound novel that mercilessly explodes the immigrant’s ancient dream of education and a better life.

»'Operation Kaspar' ends after 123 pages but deals with nothing else than the whole of the 20th century.«
der Freitag