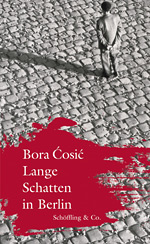 memoir, fiction
From the Serbian by Brigitte Döbert

»Bora Ćosić is the astute but jovial grand old man of the Serbian avant-garde, strong in polemics and even better in reminiscences.«
Neue Zürcher Zeitung

»Berlin is also a frame of mind.« Heeding this motto, Bora Ćosić brings his memoir EINE KURZE KINDHEIT IN AGRAM up to date in his adopted home Berlin. In brief vignettes that owe a debt to Walter Benjamin, Ćosić considers the everyday phenomena of the city and its architecture as enigmatic symbols of European bourgeois culture and of writing. He finds metaphors for the modern psyche and for modern society in such details as the layout of his own flat in an old apartment block, the facade of a building, a door or a lift. Thus, in a kind of philosophical excavation, he reconstructs Berlin anew as the embodiment of the twentieth century. Sceptical of claims to absolute validity, he stresses the subjectivity of his own perspective, which can comprehend things only in the form of their ›long shadows‹.

Bora Ćosić, born in 1932 in Zagreb, is one of Europe’s greatest writers. Across more than thirty books and collections of essays he has depicted the senselessness, grotesqueness, absurdity and tragedy of the history of the Balkans. Ćosić lives in Berlin and Rovinj.
He has most recently been awarded the 2011 International Stefan Heym Prize for his work.

»With its parenthetic wistfulness Bora Ćosić's marvellous book often reminds of Gottfried Benn's sober melancholia. If wrench is broken so tenderly and fairly rationed as here, you take it with composure – and even want more of it.«
DIE ZEIT

»A world with its particular coordinates and prospects, thread of thought and flow of language which are not only unique compared to Serbian literature but also compared to the entire European literature.«
Neue Zürcher Zeitung

»LANGE SCHATTEN IN BERLIN does not primarly focus on the historic traces but on the physiognomy of objects and places. Cosic is at his best whenever he stays close to these objects, restraining himself from artificial indulgence.«
Süddeutsche Zeitung

»Ćosić watches carefully. With his thoughtful observations he follows the tradition of the famous Berlin flaneurs Walter Benjamin and Franz Hessel. A book that should be read slowly so its gentle poetics can take full effect.«
Südwestrundfunk (SWR2)

»Aware of the past, with a sharp eye for the present and a style of palpable precision. European literature at its best.«
Wiener Zeitung

»Cosic has a great talent to spot the ordinary and turn it around to express a different, second reality.«
Westdeutscher Rundfunk

»What Bora Ćosić finds and creates is a marvelously dense texture in which new perspectives open up unexpected images of pieces of the puzzle.«
Neuebuchtipps.de

»Ćosić’s kaleidoscopic text is a small masterpiece about the relationship between present and past, and between the individual and the world.«
Der Tagesspiegel