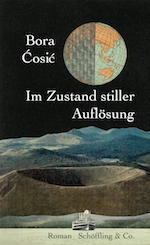 Bora Ćosić
In a State of Quiet Collapse

A writer’s journey on the trail of Marcel Proust goes awry right from square one: his friends and travelling companions, a French married couple, insist on seeing the small Breton town of Tréboul, which Proust never actually visited. Their little group sets up camp at the Hotel Armor, where an intrusive and forceful doorman, bristling with clichés about »us« and »the others«, gives the ailing writer plenty of food for thought.
Left to his own devices in dreary Tréboul, he channels his observations about decadence and boredom into his own unique search for lost time. Full of self-irony and humour, the narrator picks apart one supposed certainty after another, including, ultimately, his own dream of writing a book about Proust.

IN A STATE OF QUIET COLLAPSE is a hilarious tirade in the style of Ćosić‘s prize-winning family epic The Tutors. Behind its grouchy wit is a bold critique of the disintegration of European culture.


»Ćosić is one of the grand old, serenely sly men of the Serbian avant-garde: strong in polemic and even better in reminiscence.«
Marko Martin, Neue Zürcher Zeitung

»At a time when people dullly retreat to their own 'identity', such books naturally have a hard stand, yet the more necessary they are.«
Jochen Schimmang, Frankfurter Allgemeine Zeitung

»Like in most of his works, the author demonstrates a far-sightedness that has nothing pretentious but pointedly and humorously represents a world that is sick of itself.«
Marko Dinić, Süddeutsche Zeitung

»In his hilarious and at the same time desperate new novel, the doyen of Serbian literature takes stock of his life as a writer.«
Franz Haas, Neue Zürcher Zeitung

»One of the great East European authors.«
intellectures