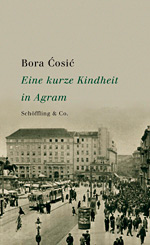 Finalist for the Brücke Berlin Award

The great Serbian storyteller recalls his formative years in Agram, as Zagreb was once known. To do so, the author of 'Die Rolle meiner Familie in der Weltrevolution' goes back to the outset of his world and thinks like a small child, revealing with amazement the puzzles of life and the secrets of language.
The child and the book alike are constantly conquering new terrain. Together, they gradually overview the entire topography of Zagreb.


»Bora Ćosić, a master of the absurd, orbits the black core of the twentieth century with playful nonchalance, cushioning the blow with humour and a sense of the grotesque.«
Bayerischer Rundfunk

»Ćosić has a masterly talent for inferring the whole from select details.«
Arte

»There may be few authors who have paid reference to the traditions of all Yugoslavian literatures as passionately as Ćosić.«
Frankfurter Allgemeine Zeitung

»Bora Ćosić, belongs to the last living intellectuals, who still draws his creativity from Central Europe’s rich spiritual heritage, especially from that of the ›Donau Monarchy‹. Ćosić is a master of confusion. (…) An impressive imagination with depth of focus on what characterized him the most – his early childhood years.«
Der Standard

»Things are floating in thought. For him, writing was the way to truth, art, and the existence as an artist.«
Frankfurter Allgemeine Zeitung

»Bora Ćosić is one of the great European writers of our time. Magically he evoked the first five years of his life in his KURZE KINDHEIT IN AGRAM, an airy book about the soul of things and the pain of awakening. (…) The books Ćosić writes are not only beautiful and intelligent ones, but also without exception books nobody else would write anymore.«
Süddeutsche Zeitung

»EINE KURZE KINDHEIT IN AGRAM is a fascinating attempt to explore the magic of infancy with its idols, its speechlessness and its limits. (...) Bora Ćosić has written an enchanting book about the soul of things and about the pain of growing up. (…) If you are looking for a piece of truly great European literature, you should try Ćosić's books.«
Neue Zürcher Zeitung

»EINE KURZE KINDHEIT IN AGRAM, the name of Ćosić’s birthplace Zagreb in Austrian-Hungarian tradition, is dedicated to Ćosić’s early years, and the astonished child’s perspective from which everything appears to be a secret.«
Der Tagesspiegel

»Bora Ćosić managed the long way across times. In his narrative tone between absolute closeness and distance, Ćosić shows the two faces of his childhood in Agram: the city between its charm and its tragic destiny - already dooming in 1937.«
Deutschlandfunk

»Ćosić is never tutor, he is always narrator, observer, melancholic, amused or angry onlooker of history - also of its own. (...) Since the beginning the author has been a poetic and in the heart jocund philosopher.«
Tagesspiegel online

»Bora Ćosić has written one of the most beautiful books about childhood.«
Stuttgarter Zeitung

»The uniformity of everyday life makes us heedless and dull, whereas children are steadfastly astonished when they start observing their environment and sharpen their senses. The Serbian writer Bora Ćosić, brings back this once experienced, but forgotten feeling in an imposing way and in a brilliantly poetic language, in which every sentence contains some insight leading the reader back to his own childhood.«
Fuldaer Zeitung

»An existential custom declaration – on the border between youth and old age, between life and death. (...) Ćosić wrote a wise and melancholic book, full of worldly wisdom. It is not a book about Agram as supposed, but rather about perception, about recollection and neglecting, about the intellectual and imaginary world of the child he was.«
Westdeutscher Rundfunk (WDR 3)

»The child's everyday life is accompanied by an impressing, symbolically charged language of metaphors. (…) EINE KURZE KINDHEIT IN AGRAM is a very important and readable text.«
Deutschlandradio Kultur

»With the eyes of a child and the light and artistic language of a brilliant author, Ćosić once more explores the places of his childhood. (...) On only a few pages Ćosić recreated a miniature of his lost home.«
Freie Presse

»He goes back to the beginning of his world and puts himself into a child’s mind with an unfolded reflective language, unsealing the secrets of life with amazement. The results are precise, idiosyncratic and deeply philosophical memories of a brilliant narrator.«
DAS tietz

»With his picturesque language that is close to the heart of things, Bora Ćosić lends autonomy to the world of the child that he was.«
Literaturen

»Bora Ćosić’s childhood memories prove him as a great European author, who wants to remember the roots of Europe, which always and again have been shaken to the core by fascism, wars, realsocialist experiments and nationalsim, but whose development couldn’t be stopped. (...) Once more the winner of the Leipzig Book Award for European Understanding and the Chemnitz Stefan Heym Award 2011 proves himself worthy of these honours.«
freiepresse.de

»It is a book about perception, about remembering and forgetting, about the world of thought and fantasy of the child Ćosić once was.«
Geisteswissenschaften.fu-berlin.de