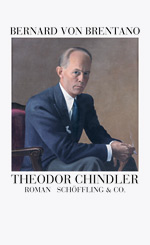 fiction
With an epilogue by Sven Hanuschek

It is 1914: In the Chindlers’ good middle-class household they play the piano and go to church on Sundays. Theodor Chindler, a member of parliament for the Catholic Centre Party, spends his days involved in poli- tics in the Berlin Reichstag, while his sons Ernst and Karl go off to the front to fight for the Fatherland. At home the other family members engage in heated debates about the Kaiser, the miserable conditions in military hospitals and the war at sea, splitting political opinion. When Chindler’s daughter Maggie gets involved with the workers’ movement – against her father’s will – and his youngest son Leopold falls in love with a male classmate, everything on the home front changes, too.

Bernard von Brentano tells a story of back-room politics during the First World War and wretched deaths in the trenches, but above all of a family caught up in a period of social and political upheaval.

THEODOR CHINDLER, written in exile in Switzerland in 1936, has been compared to Heinrich Mann’s Der Untertan or Professor Unrat. It is a portrait of an era and way of life that has lost none of its urgency and power.

»This novel about a German Catholic bourgeois household enacted before the backdrop of wartime is an exquisite book mastered with a light and sure touch: clever, clear, compelling.«
Thomas Mann

»The one and only outstanding literary work to the primal catastrophy of the 20th century. (...) Brentano's real significance in this historical context becomes apparent through his laconic elegance, stylistic advantage and unfussy boldness. In terms of historiography, Brentano was far ahead of his times.«
DIE WELT

»The south-German counterpart to The Buddenbrooks.«
Südwestrundfunk (SWR)

»A family saga, a novel of different ideologies and beliefs. Not only Brecht loved it, but also Thomas Mann.«
Frankfurter Allgemeine Zeitung

»This novel is one of the greatest books about the First World War and the end of the German Empire. (...) THEODOR CHINDLER deals with the erosion of life forms and with the destruction of the political system; through the dense web of these sidetracks Brentano discovers the inner world of modern individualism without losing the cool tone of the chronist tracing the introspection of a psychological novel.«
Süddeutsche Zeitung

»THEODOR CHINDLER, a multilayered novel told in a calm and realistic way, ranks among the great books about the devastating time that was the First World War.«
Bayerischer Rundfunk (BR 2)

»With his novel THEODOR CHINDLER - written in exile and published in 1936 - Bernard von Brentano has firmly established himself a position in German literary history of the 20th century.«
Frankfurter Rundschau

»Bernard von Brentano tells the story of backroom politics and the wretched deaths in the trenches, but the book is ultimately an engrossing family saga set in times of social upheaval. THEODOR CHINDLER is a bittersweet snapshot in time that remains potent to this day.«
New Books in German

»So fascinating a mix of politics and private lives - beginning with a marital quarrel at the outbreak of the First World War, followed by a whole cascade of family disputes leading on to the November revolution of 1918.«
Frankfurter Allgemeine Sonntagszeitung

»There is a reason why Thomas Mann and Bertolt Brecht had a high opinion of this novel. With this new edition Schöffling & Co. has rescued one of the most interesting writers of the interwar years from oblivion. Still worth reading today!«
rezensionen.ch