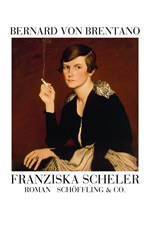 Berlin, 1929: hardly has the Republic emerged from the war before it begins to crumble, as the world teeters on the edge of an economic crisis. Leopold Chindler, a journalist and author, chances across his childhood sweetheart, Franziska Scheler, in his brother’s apartment. Now divorced and alone, she has been living with her small son in Berlin. Leopold can’t let go of their encounter, and he begins to pursue her once more. For the time being, however, their rekindled love must remain a secret, for fear of Richard Scheler, Franziska’s ex-husband. Only a few trusted people are aware of the true nature of their relationship. While Leopold is faced with numerous challenges at work, Franziska cares for her son. She is often lonely, and clings to Leopold. All these obstacles stand in the way of their love before it has even had time to develop.

The significant rediscovery of a work of exile literature that has not been reissued since 1945, now published in a definitive edition made using Bernard von Brentano’s personal notes.

»The book has so many facets. It is a romance as well as a social novel and a domestic novel. It is a novel about the media and about time.«
Bayerischer Rundfunk (Bayern 2)

»The one and only outstanding literary work to the primal catastrophy of the 20th century. (...) Brentano's real significance in this historical context becomes apparent through his laconic elegance, stylistic advantage and unfussy boldness. In terms of historiography, Brentano was far ahead of his times.«
DIE WELT

»This novel about a German Catholic bourgeois household enacted before the backdrop of wartime is an exquisite book mastered with a light and sure touch: clever, clear, compelling.«
Thomas Mann

»A family saga, a novel of different ideologies and beliefs. Not only Brecht loved it, but also Thomas Mann.«
Frankfurter Allgemeine Zeitung