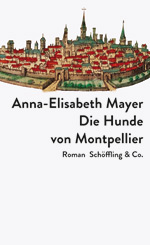 Shortlisted for the Alpha Award

Anna-Elisabeth Mayer
The Dogs of Montpellier

How far should one go in the pursuit of knowledge?

It is a scandalous accusation: Rondelet, a mid sixteenth-century doctor teaching at the renowned university in Montpellier in south-west France, is said to have gone too far in his dissection of human bodies. Rivals and adversaries scheme against the doctor, who thinks himself above rules and superstitions. The public’s mistrust even insinuates its way into his own house, where his wife Jeanne and childless sister-in-law Catherine are locked in a subtle conflict. With the birth of his and Jeanne’s child, the delicate balance between Rondelet’s work and his family is permanently upset, and his world threatens to fall apart.

Anna-Elisabeth Mayer depicts the dramatic struggle of a man whose dedication to the pursuit of knowledge at any cost leads him to defy convention. In vivid, tactile prose she brings to life a piece of scientific history and examines our approach to social taboos. An unconventionally written portrait based on real historical events.

»Anna-Elisabeth Mayer develops her rich world of narration straightforwardly and without much ado. In her precise prose she plays effortlessly with known genres and at the same time debates great questions of mankind.«
Reinhard Priessnitz Prize, The Jury

»Viennese author Anna-Elisabeth Mayer has written a thrilling novel, which leads its psychologically credible figures through an epoch of radical changes. The author immediately wins the reader over by her narrative and a clear voice, connoting historical events but maintaining literary.«
Tageblatt

»Anna-Elisabeth Mayer tells a thrilling and literary refined story without falling into the traps of historical fiction. (...) She needs neither overdrawn tableaus nor excessive historic flavor, and she refrains from an overemphasis on factual details (...). A highly dramatic, a fascinating novel from the very first page.«
Der Standard

»DIE HUNDE VON MONTPELLIER is a thrilling portrait of the life of Guillaume Rondelet, a university professor of medicine in 1550s France. This historical novel is laconic and concise, and has a quasi-scientific and yet poetic tone. There is little artifice in Mayer’s writing, as if Rondelet’s matter-of-factness had spread through its pages.«
New Books in German

»Based on historic facts, Anna-Elisabeth Mayer invents a story which becomes incredibly vivid. One longs to smell the blossoms of bitter orange, to leave behind the walls of the teaching hall blackened with soot.«
Österreichischer Rundfunk

»DIE HUNDE VON MONTPELLIER is a convincing historical novel and a lucky strike for the genre. With a clear, authentic voice, Anna Elisabeth Meyer manages to tell the story not only of an essential part of the history of science but also of a fundamental moral conflict.«
Fixpoetry

»Anna-Elisabeth Mayer shows an obsessed scientist who crosses the boundaries of his time. (...) Her perfect use of the cinematic technique of simultaneous experience makes for a novel of tremendous literary quality.«
Sächsische Zeitung

»A powerful piece of prose with refined irony. (...) Mayer’s style makes her small novel sound rich and lively. It makes you want to smell the blossoms on the bitter orange tree and leave the soot-smeared walls of the medical theatre behind.«
Österreichischer Rundfunk

»As in her successful debut FLIEGENGEWICHT Anna-Elisabeth Mayer shows sharp irony and slight provocation of social taboos. She created the history around Rondelet with aesthetic exigency and storytelling talent and wrote an excellent novel about society.«
Literaturhaus.at

»Without superfluous metaphors but with gentle restraint in presenting this epoch Anna-Elisabeth Mayer gives us food for thought for our present-day conditions.«
DIE PRESSE Wien

»Anna-Elisabeth Mayer depicts a conflict as explosive nowadays as in the 16th century.«
Westdeutscher Rundfunk (WDR 5)

»Anna-Elisabeth Mayer does not write historicising genre prose but rather takes on the perspective of the present – and although she has written a baroque novel, she uses a pleasantly unobtrusive language filling less than 200 pages. Here is a narrator who has found her way early.«
Falter, Wien