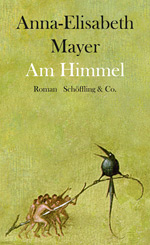 Foreign Rights represented by Kathrin Scheel at This Book Travels

Inspired by a criminal case that took place in late nineteenth-century Vienna, Anna-Elisabeth Mayer tells a story about the eternal struggle between rich and poor.

Millionaire Johann von Sothen is a flamboyant character, a self-made man from humble beginnings who made his riches by selling lottery tickets. From the outside, Sothen looks like a philanthropist, courted by high society and the church. He donates money, is awarded medals, builds a chapel and moves into a stately home known as ‘The Heavens’.
Nobody suspects that his wealth is based on an unscrupulous fraud.

On Sothen’s estate his workers are treated like serfs, and Sothen’s miserliness is encouraged by his wife Fanni, herself childless and particularly jealous of Eduard Hüttler, an impoverished hunter who lives out of wedlock with his four children and their mother near Sothen’s home. Fanni exploits Eduard's desperate situation, harassing him and the workers on the estate and playing them off against each other. As long as his workers are fighting among themselves, Sothen doesn’t have to worry about them turning on him. Then one day, amid this web of oppression, dependency and protest, shots ring out…

In gripping and atmospheric prose, Anna-Elisabeth Mayer depicts the rise and fall of a man brought low by his own greed, exploring a society that subordinates everything to the illusory guile of money and power.


»Anna-Elisabeth Mayer develops her rich world of narration straightforwardly and without much ado. In her precise prose she plays effortlessly with known genres and at the same time debates great questions of mankind.«
Reinhard Priessnitz Prize, The Jury

»This concise novel offers a keen emotional insight into the lives and inner thoughts of its many characters. (...) AT HEAVEN’S EDGE is a tragic love story, a glorious costume drama and a real-life murder case all rolled into one.«
New Books in German

»Mayer keeps pointing out the difference between thinking and acting, revealing the conflicting interplay between the inner and outer world of her characters.«
Björn Hayer, der Freitag

»So masterfully told that I couldn’t put the book down, but read it in one go.«
Literaturhaus Wien

»A multi-voiced portrait of manners from a period of social and economic inequality. (…) By looking back into history, Mayer gains valuable insights for the present.«
Sophie Weilandt, Österreichischer Rundfunk (TV)

»Mayer shows what it means to depend on the kindness of those who weren’t kind at all. Making a living was hard before the establishment of the welfare state.«
Dominika Meindl, Der Falter

»A novel about historic events could not be more relevant than this«
Johanna Öttl, Die Presse

»This story is told with an unconventional breathlessness coming from both the brevity of the sentences as well as the rapid and often sudden changes of perspective.«
Evelyne Polt-Heinzl, Literatur und Kritik