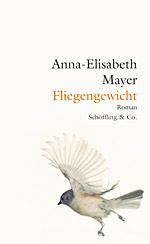 
The setting – cut off from the world: in a hospital a young woman joins three older women in a ward. The reader only knows that they all have heart problems, the end is near – and all of them try to talk it down. In charge of the ward is Dr Winter. The ladies as well as the ward matron are spellbound by him. A bet pushes the young woman into a competition for his favour. The thrill of the race as elixir of life?

Full of rhythm and tragi-comedy, the voices of the characters outbid one another, part swansong, part operetta trill, dissected by the storyteller’s keen blade. A chamber piece staged on shaky ground, in which the reader is moved by the characters and their stories of love and suffering. Yet in Women’s Ward Number 5 life goes on.

»With FLIEGENGEWICHT Anna-Elisabeth Mayer has written a cheerful and at the same time melancholic novel. It is composed in a competent way and written with stylistic confidence. A convincing literary debut that deserves attention.«
Josef Haslinger (Jury Alpha Award)

»Anna-Elisabeth Mayer develops her rich world of narration straightforwardly and without much ado. In her precise prose she plays effortlessly with known genres and at the same time debates great questions of mankind.«
Reinhard Priessnitz Prize, The Jury

»A fabulous debut. (...) It is so intriguing that you start to secretly wish some complication on the narrator. Nothing life-threatening of course, just something minor - if only time-consuming so that the story may go on forever. It lies in the nature of the heart that some farewells have to be said. But none of them is as bitter as the one when you reach the final page.«
KulturSPIEGEL

»Mayer creates a medley of voices, warm and intimate, that can only develop on a hospital ward – a little distanced from the world. She describes a brief idyll – before life breaks in again – with poetry and sensitivity. (...) FLIEGENGEWICHT is a mature debut, a clever novel.«
Literaturhaus Wien

»Empathetic, humorous, and despite its great seriousness never too heavy. Anna-Elizabeth Mayer touches on the great themes of life. In the ladies ward, she shows the full range of cardiology of the heart - pounding, fluttering, trembling, getting heavy, out of rhythm, and standing still.«
AVIVA Berlin

»An intimate play that takes on nothing less than the fragility of life. The result is a text that manages to tell of the contradictions and depths of existence and, at the same time, to escape and counter them, light-footedly and with a wonderful sense of humour.«
ORF (Austrian Radio)

»Mayer's language is a piece of good workmanship. The author knows how to make language ripe with irony and holds on to her unpretentious tone. (...) The book makes for a truly pleasant read.«
Volltext

»FLIEGENGEWICHT is one of these books, which really make you laugh and cry. It is an outstanding, felicitous debut by an ambitious young writer. Moving, but not superficial and never boring.«
Kultur

»Such refreshing debut. (...) A colorful and partly shrill, party restrained maze of dialogue that is held together by overlying themes and running gags.«
Die Presse

»Anna Elisabeth Mayer narrates a hospital story of the unusual kind, where people also die and cry, but never in a sentimental or over-dramatic manner. Death and life not only belong together, they also have highly grotesque traits and the end of life is not less comical than the tragic entanglements in its middle - which in retrospect offer more material for the comedy anyway.«
Deutschlandradio

»Everyone studies the bestseller lists. But there are literary discoveries to be made outside these short-lived rankings.«
Schwäbische Zeitung

»Masterly Anna Elisabeth Mayer changes the moods and the rhythm. What appears being narrated easily is wonderfully designed. A good novel has to touch the reader and has to cover issues that are relevant. Growing older, taking stock, love and death are such issues.«
Die Presse

»FLIEGENGEWICHT is a gem. The charm of its characters and the unanticipated depths of emotion that it evokes make reading it a rare and warm experience. The dialogue, intelligent and funny, makes it impossible not to fall in love with the people in and around hospital room number five. (...) Mayer’s winning style is simple and straightforward. The strength of her writing is her ability to create dialogue that is absurd, at times extremely funny and above all very real.«
New Books in German