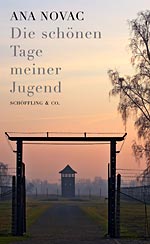 Ana Novac
The Beautiful Days of My Youth

»When you have no more tears to weep, only one thing remains: laughter!«

DIE SCHÖNEN TAGE MEINER JUGEND is a unique document: the diary of a fourteen-year-old Jewish girl from Transylvania, which she kept in Auschwitz and other concentration camps. Neither a subsequently remembered account nor a non-fiction novel, it presents authentic testimony that even horror has an everyday dimension.
It is a macabre, distorted world in which the young Ana Novac laughs and cries, starves and eats, gets beaten and must comprehend what it means to die or to survive. Yet it is strange, uncanny, understandable and unsettling how much the possession of the notebook and the pencil stub and ultimately writing itself become the content of her existence and the subject of the diary. I write, therefore I am.

In ghostly episodes, people appear only to vanish without a trace. Only one person is concerned about being in the diary, who wants to take it away from her, but then asks for a positive mention: the commandant.

How would a young woman manage to write there, to hide her notes and even smuggle them outside? »It was very simple«, Ana Novac says, »Hitler was never interested in our thoughts, he only wanted our skins.«

»This book must be named in the same breath as Imre Kertész, Primo Levi, and Ruth Klüger.«
Werner Renz, historian and Holocaust expert, Fritz Bauer Institute

»The French regard her as ›the Romanian Anne Frank‹, yet unlike her German fellow sufferer, the diary of Ana Novac does not end with her deportation to the concentration camp, but it starts right there (...).
Historians Sybille Steinbacher and Werner Renz speak of a reading experience reminiscent of Nobel Award Laureate Imre Kertész, while Auschwitz expert Robert Jan van Pelt praises the author’s ›astonishing power of observation and memory‹.«
ZEIT Magazin

»Most impressive, how intensely and vividly the author pictures the daily routine at Auschwitz. (...)
Some passages actually reminded me of Fateless by Kertész. Parallels can also be drawn with regard to the literary depth of the text.«
Interview with historian and Holocaust expert Sybille Steinbacher (ZEIT online)

»Ana Novac’s diary is, as far as one knows, the only diary surviving Auschwitz. It is a first-grade literary testimony of earth-shaking momentum.«
Welt am Sonntag

»Ana Novac has achieved the unimaginable: a 14-year-old girl in the concentration camps, she secretly kept a diary. Her now revised and re-published notes touch on a taboo: the Jewish girl writes about the horrors of the holocaust with jet-black humour – and she firmly refuses to be an ›Auschwitz machine‹.«
SPIEGEL Online

»Her language is most poetical, her description of the different prisoner groups, their rivalries among each other, among the wardens and kapos are precise, sometimes
sharpened into the comical.«
Frankfurter Allgemeine Zeitung

»This book is an invaluable treasure. (...) Her writings capure that part of the living and dying that Anne Frank’s diary is missing. Where her records end, Novac’s begin.«
Jüdische Zeitung

»No part of this book is fictional, it is a document right from the bleakest days of humanity, written at places of unimaginable horror.«
Süddeutscher Rundfunk / Österreichischer Rundfunk

»Most striking about this undated diary are its people. (...) Novac lends a face to the seemingly faceless crowds at the camp, never glorifying or euphemizing, but deeply unique (...). Despite the distrust, stalking and stealing from each other, it is the moments of friendship and solidarity that mark the core of her notes.«
Freitag

»DIE SCHÖNEN TAGE MEINER JUGEND shows the double face of humankind: appalingly vicious and surprisingly kind. Ana Novac tells about laughter in hell and the banality of death, and how literature helps you survive.«
Deutschlandradio

»A first-hand account of Auschwitz, recorded by an innocent child. The incomprehensible becomes close to comprehensible.«
Westdeutsche Allgemeine Zeitung

»She describes the horror of the camps in detail – employing a stylistic device hitherto considered taboo: black humour. (...) And concludes: ›When you have no more tears to weep, only one thing remains: laughter!‹ «
Berliner Zeitung

»Ana Novac allows an insight into a concentration camp’s daily life from the perspective of a girl, the life and death of the prisoners, the violence and the constraints, and in particular the situation of female prisoners: dense, haunting, reflective and with an amazing ability to realise the surreal and the bizarre in this parallel world again and again. Writing to survive, as an act of self-assertion – unusual for a fifteen-year-old.«
Deutsche Welle