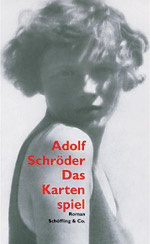 Adolf Schröder
The Game of Cards

>> nominated for the Sophie Brody Medal of the American Library Association


Markus Hauser desperately needs money, so he accepts a not particularly lucrative job with an old lady in a dilapidated villa. He is supposed to sort through letters, thousands of letters, all of them addressed to a certain Almut, the first letters bearing the date of 1939.
When he has arranged a year’s worth in chronological order, his employer appears and takes them away from him. It is an uncanny house, in which Selma Bruhns lives behind drawn curtains. When Markus wants to call off the job, she offers him three times the pay.
Consumed by curiosity about what happens to the letters once they are sorted, he creeps after her and has to watch as the burns them in the garden.

On the sixth day, all the letters arranged and burnt, Selma Bruhns invites Markus to play a card game. Should she win, then he must fulfill her a wish – but will also hear a story. She always wins – she emphasizes.
Then she tells him the story of Almut and Selma, two Jewish girls with only one passport for Brazil...

»The constellation is reminiscent of The Reader.«
Frankfurter Allgemeine Zeitung

»Read Adolf Schröder: You will not forget him!«
Magazine Littéraire

»A gripping and up-stirring novel. Adolf Schröder: A name one should remember.«
Le Figaro

»As exciting as a thriller.«
Le Nouvel Observateur