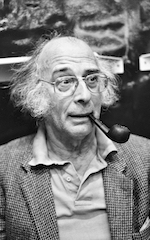 Walter Boehlich (1921–2006) was the editor-in-chief of the Suhrkamp Verlag publishing house from 1957 to 1968. As a translator and journalist, he was also later responsible for editing, among others, Walter Benjamin’s collected writings (Gesammelte Schriften) and Gershom Scholem’s letters (Briefe). In 1969, he co-founded the publishing house Verlag der Autoren and in 1979 the bookstore Autorenbuchhandlung in Frankfurt on Main. Walter Boehlich died in Hamburg.