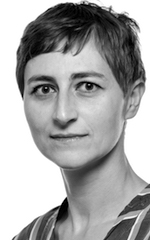 Ulrike Almut Sandig was born in 1979 and lives in Berlin. She is the author of stories, poems, radio pieces and language performances, where she collaborates closely with musicians and composers. Ulrike Almut Sandig has been invited to many international literary festivals, exchanges and residencies. Her poems have been widely anthologized and received, among other awards, the renowed Roswitha Prize.

Several of her poem collections have been published in English.