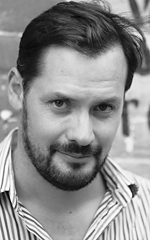 Simon Urban, born in Hagen in 1975, lives in Hamburg. After studying German Literature in Münster and training at the renowned copywriter school Texterschmiede Hamburg, he studied Creative Writing at the German Institute for Literature in Leipzig.

He has received numerous awards for his prose work, including a Max Kade Fellowship by the University of Iowa. His first novel PLAN D has currently sold into 12 languages. The English translation of PLAN D is nominated for the IMPAC Award 2015.