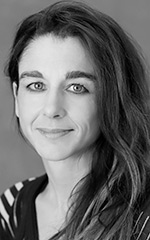 Silke Scheuermann, born in 1973, lives near Frankfurt am Main. She studied Drama and Literature in Frankfurt, Leipzig and Paris. Her poems, short stories and novels have won her a number of scholarships and awards and her work has been translated into various languages. She was a member of the Jury of the Frank O’Connor International Short Story Award and held a Poetics lectureship in Wiesbaden.