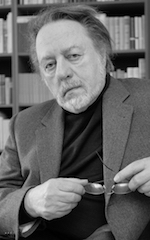 Ror Wolf (1932-2020) was one of the most idiosyncratic and prominent authors of German Literature after 1945, and also a master of fine arts who created a vast opus of surrealistic collages.

Wolf’s work is concerned with the multifold relationships between perception and reality, where the latter is being (re)created as a world unto itself, melodious, consistent, and eerily removed from conventional perspectives. His prose is influenced by Beckett, Kafka, and Robert Walser, and his early novel Fortsetzung des Berichts (Continuation of the Report) is considered to be one of the few German examples of the nouveau roman. Wolf’s writing opens up the dimension of writing itself, of associations, of memory, of hazy sensory preceptions - a world of uncanny cosiness and the savagery beneath.