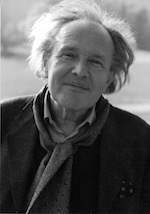 Peter Kurzeck (1943–2013) was born in Nazi-occupied Tachau (now Tachov in the Czech Republic). He grew up in West Germany after his mother fled from Bohemia with her children in 1946.
As a writer, Peter Kurzeck is regarded as a ‘radical biographer’ and his writing has been compared to James Joyce’s for its profoundly associative style blending reminiscence and observation.
Kurzeck was awarded countless literary prizes, including the Alfred Döblin and Robert Gernhardt Prizes.