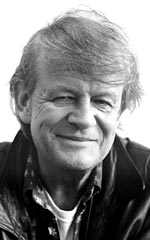 Paulus Böhmer was born in 1936 in Berlin and now lives in Frankfurt am Main. He studied Law, Architecture and German, became a clerk in an industrial company, and among other jobs has worked as a grower of perennial plants and ornamental grass, a delivery man for a lingerie company, and as an editor and copy-writer. Between 1985 and 2001 he was director of the Hessian Literature Office in Frankfurt am Main.