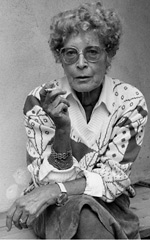 Monica Huchel, born in 1914, was first married to sculptor Fritz Paul Melis. After 1945, she became a free-lance journalist reporting for theatre, film and radio. 1953 she married Peter Huchel. She became editor of the magazine Sinn und Form and worked as a translator from Russian.
After having left the GDR, Monica and Peter Huchel spent their lives in Rome and only later returned back to Germany. Peter Huchel died in April 1981, Monica Huchel in June 2002.