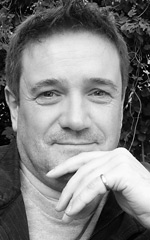 Markus Orths, born in 1969, studied Philosophy, French and English Literature and lives as an author in Karlsruhe. For his novels and short stories he has received various awards.