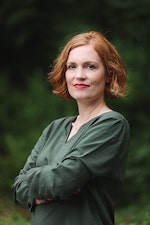 Maike Wetzel was born in 1974 and works as a writer and screenwriter in Berlin. She studied at the Munich Film School and in the UK. Her debut novel, ELLY, won the Robert Gernhardt Prize and the Martha Saalfeld Prize.

Her short stories have been translated into numerous languages and received multiple awards.