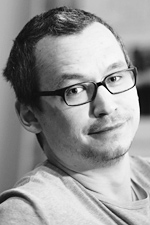 Born in 1977 in Werdau, studied Philosophy, English and Ethnology in Münster, then at the German Institute of Literature in Leipzig. His debut DER LANGE FUSSMARSCH DURCH DIE STADT BEI NACHT was published in 2006 in Lyrik Edition 2000; he has also published poems in numerous anthologies and magazines.