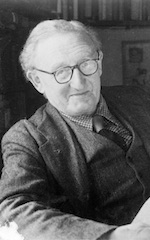 Justin Steinfeld was born in Kiel in northern Germany in 1886. A journalist, dramaturge and theatre critic of Jewish heritage, he lived in Hamburg. After being taken into “protective custody” in 1933 and brought to Fuhlsbüttel concentration camp, he managed to escape to Prague, where until 1938 he contributed articles to a number of anti-fascist newspapers. In 1939, Steinfeld fled to England via Poland, where he lived until his death in 1970. In 1984, the novel A Man Reads the Paper was first published posthumously.