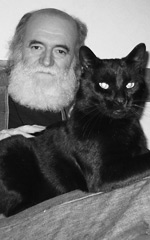 Jugoslav Vlahović, born in Belgrade in 1949, is Professor of Graphic Design at the Academy of Applied Arts in Belgrade. He has worked for many years as illustrator and cartoonist for various national and international newspapers, including The New York Times, the Wiener Zeitung and Le Monde. Ten books of his drawings and a portfolio of his prints have been published; in addition there have been 70 solo-shows of his work.