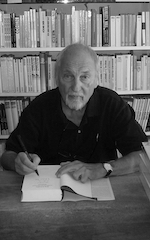 Jörg Schröder, born in Berlin in 1938, was the enfant terrible of the German publishing scene in the second half of the twentieth century, as well as a great discoverer of literature.

He began working at Melzer Verlag in 1965, which he rescued from bankruptcy with THE STORY OF O. In 1969 Schöder parted acrimoniously with the publishing house – all of its employees and most of its authors followed him to his newly founded März Verlag, which he lead until 1987. Jörg Schröder died in Berlin in June 2020.