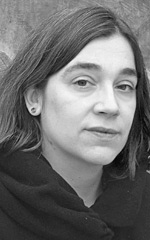 Inka Parei, born in Frankfurt am Main in 1967, has lived in Berlin since 1987. Her first novel DIE SCHATTENBOXERIN has been translated into 13 languages and with her second WAS DUNKELHEIT WAR she won the Ingeborg Bachmann-Award. Inka Parei has received the New York Scholarship of the German Fund for Literature for 2013.