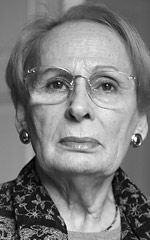 Inge Geiler was born in Mainz in 1935. After an apprenticeship in Zurich, Geiler moved to Frankfurt am Main in 1957, studied at Frankfurt School of Clothing and Fashion and subsequently taught there until 1963. After her marriage she worked in her husband’s practice, where she established her first contacts with returning Jewish immigrants.