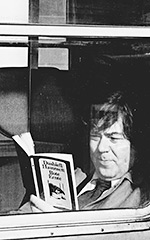 Herbert Heckmann was born in 1930 in Frankfurt am Main. His comprehensive body of work includes stories, novels, children’s books and cookbooks.

For Benjamin and His Fathers he was awarded the Bremen Literary Prize. He was co-editor of the magazine Neue Rundschau, a freelancer for Hesse Radio, president of the German Academy for Language and Literature, a professor at the University of Art and Design in Offenbach am Main and has sat on numerous juries. He died in 1999 in Bad Vilbel.