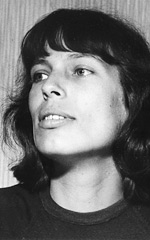 Helga M. Novak, born in 1935, grew up in the German Democratic Republic. She was expelled in 1966 as one of the first poets. She then lived in Yugoslavia, Czechoslovakia, Portugal, Poland before she returned to Berlin where she died in 2013.

Helga M. Novak has won numerous awards and her fiction and poetry have been widely anthologized.