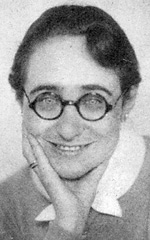 Gabriele Tergit (1894-1982), writer and journalist, became known for her court reporting as well as her novels, articles and other prose pieces. The writer and journalist was both an implacably careful and sympathetic observer. The charm of her novel lies in its trenchant and highly comical dialogues as well as its precise descriptions of contemporary society - from dancing girls to master carpenters to media moguls. Her own workplace - the editorial offices of the Berliner Tageblatt's cultural section - comes under particular scrutiny. Even in those days, Berlin, deep in eastern Germany, was an ideal yet difficult city for creative people.

In November 1933, Tergit emigrated to Palestine, moving to London in 1938. From 1957 to 1981 she was secretary of the PEN Centre for German-language writers abroad.