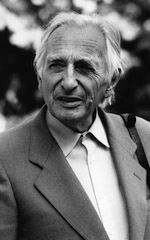 Erich Kuby (1910–2005) was one of the Federal Republic of Germany’s best-known chroniclers. As a journalist involved in the student movements, he wrote for publications including Der Stern and Der Spiegel, adapted socially critical pieces for radio and TV, and published books on contemporary history.

In 1992 he received the Journalism Prize by the City of Munich. In 2005 he was posthumously awarded the Kurt Tucholsky Prize .