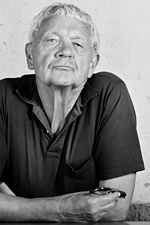 born in 1941 in Amberg, a member, along with Robert Gernhardt, Chlodwig Poth, F.W. Bernstein and others, of the ‘New Frankfurt School’ and in 1979 one of the founding members of the satirical magazine Titanic. He worked as a journalist and an editor before becoming a freelance writer. His literary work includes novels, short stories, satires, essays and commentaries, and can be considered unique in its mixture of romanticism, irony and an extremely particular style. Eckhard Henscheid lives with his wife in Amberg.