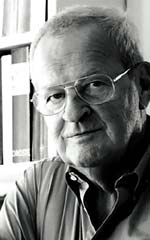 Dieter Meichsner (1928 – 2010), born in Berlin, was a student at both the Humboldt Universität and the Freie University Berlin. His major novel DIE STUDENTEN VON BERLIN was first published with Rowohlt Verlag in 1954. Dieter Meichsner was head dramaturge, and later head of the main department of television drama at the Norddeutsche Rundfunk station. As a writer of successful radio and television plays such as BESUCH AUS DER ZONE, PREIS DER FREIHEIT, DER STECHLIN (adapted from the novel »The Stechlin« by Fontane), and the white collar thriller series SCHWARZ ROT GOLD, he was awarded numerous awards. He died in 2010.