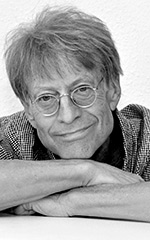 Dieter Krause was born in Berlin in 1947, and still lives there today.
He studied philosophy at Humboldt University in Berlin and subsequently became an editor at the Berliner Zeitung. During that time he formed a conspiratorial opposition group that was eventually broken up by the Stasi.
Later he was briefly editor-in-chief of Die Andere, a newspaper that became the organ of the GDR's civil rights movement. From summer 1990 onwards he spent more than twenty years at the Berlin office of the prestigious news magazine Stern.