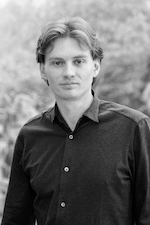 Damiano Femfert, born in 1985, grew up in Germany and Italy. He has written short films, feature films, theatre pieces, a documentary and several travel articles, including for the Frankfurter Rundschau and Neue Zürcher Zeitung. In addition to his activities as a writer, he is an art curator and also works as a lecturer in Rome, where he also lives.