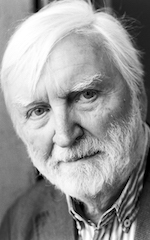 Bora Ćosić, born in Zagreb in 1932, grew up in Belgrade, Serbia. Having worked as a journalist and editor of various literary magazines, he left the country in 1992 out of protest against the Milošević regime and later settled in Berlin. He is the author of some thirty novels, story collections and essays, including his magnum opus Tutori/The Tutors which won the Prize of the Leipzig Book Fair.

Ćosić is one of the last authors to describe his native language as Serbo-Croatian in a rejection of nationalist literature. Today he lives in Berlin and Rovinj.