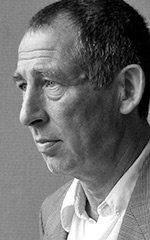 Bernd Wagner was born in 1948 in Wurzen (Saxony). He initially worked as a teacher, but since 1977 has been publishing novels, short stories, children’s books, essays, poems and plays. From 1982 to 1985 he co-edited the illegal literary journal Mikado. In 1985, he was expatriated by the East German authorities from East Berlin to West Berlin, where he still lives today.