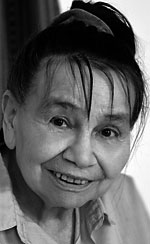 Ana Novac, born in 1929 in Transylvania (Romania), was deported to Auschwitz in 1944. Transferred from one camp to the next, she lived to witness the liberation in May of 1945. After periods in Bucharest and Berlin, Ana Novac settled in Paris in the 60s, where she was close to Jean-Paul Sartre (›Sartre wrote me a letter saying he had never read anything on Auschwitz like it‹) and Simone de Beauvoir. She published a number of novels and was also a noted playwright. Ana Novac died in March 2010.