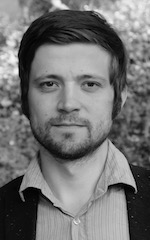 Alexandru Bulucz, born in 1987 in the Romanian city of Alba Iulia, where he also lived for his first thirteen years, studied German and comparative literature in Frankfurt am Main.
He is a poet, editor, translator and critic. His poetry debut AUS SEIN AUF UNS was published in 2016. Alexandru Bulucz lives in Berlin.